In this section we’ll look at how authentication works for serverless apps in AWS. Over the course of the next few chapters we’ll be looking at the various authentication options.

Let’s start with some background. Say I was issued a RFID security badge by my company. Every morning I’ll need to walk through a metal turnstile in the fence, and wave my badge in front of a black, plastic box. It would click and the indicator would turn green. Allowing me to push my way through the turnstile.

Authentication is the process of verifying that the person making the request is who they say they are. In the story above, my badge was how I authenticated myself to the turnstile. It had a number encoded in it that identified who I was. Another example would be showing your photo ID when you go through security at the airport.

When I waved my badge in front of the black box, the system was able to verify who I was—that’s authentication. Once it knew who I was, it needed to determine if I had authorization—or permission—to open the door. Once it decided that I had permission to enter, it made the light on the box turn green and unlocked the turnstile because I was authorized to enter.

You can use one of AWS’s built-in authentication methods in your API Gateway or AppSync APIs. Or if you need some extra features, there are plenty of third-party services, some of which you can self-host.

Let’s look at a couple of these options in detail.

AWS IAM is how AWS controls access to resources natively. When you log in to the AWS console or use the CLI, your request is authorized by IAM.

You can use IAM to control access to an API Gateway or AppSync API by attaching a role to the resource that’s making requests. At runtime, the resource will assume the role, which will allow it to make requests to your API depending on what permissions you’ve given to the role.

While you can use Cognito Identity Pools to exchange a social login token for an IAM role, IAM is only for AWS users to manage authorization and access to resources.

IAM is a free service provided as a part of AWS.

AWS Cognito is the default choice when you want to enable user login for your serverless application. It gives a lot of functionality out of the box, like password resets, multi-factor authentication, social account linking, user groups, and more.

A user’s info is stored in a Cognito User Pool when they sign up. Users will then authenticate with a username and password. Once the User Pool has authenticated the user, it will send back a token. Then, when a user makes a request to your API Gateway, it will attach the token to it. API Gateway will validate the token automatically, check that the authenticated user has authorization to perform the request, and finally return the response. 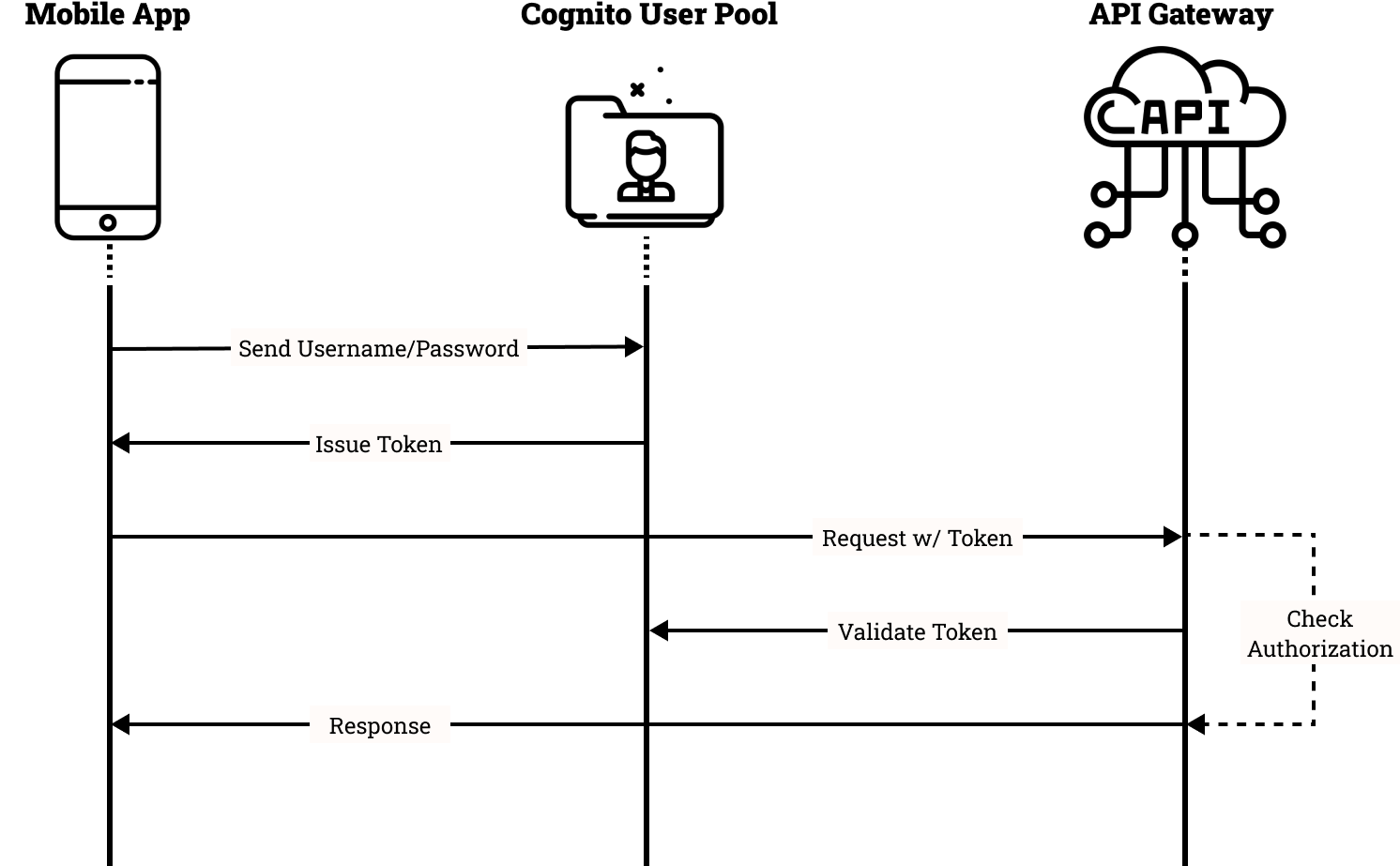 When you open Cognito in the AWS Console, you have two options:

So far, we’ve only been talking about User Pools. So, what are Identity Pools?

For a detailed comparison, check out our chapter on Cognito User Pool vs Identity Pool.

User Pool pricing is based on the number of users that interact with the service in a given month. AWS refers to this as Monthly Active Users or MAU. It doesn’t matter if the user does a token refresh, or signs in ten times, they only count as one active user.

The table below shows how much you’ll pay for a specific number of users, but this is just to give a general idea of cost. For the most accurate information, see the Cognito pricing page.

Third-party providers like Auth0, Okta, One Login, and FusionAuth tend to have a better developer experience than Cognito.

While, Cognito has fantastic integration with other AWS services, but it does have an ugly side. The most frustrating issue that is that there are a lot of User Pool properties that cannot be changed once the pool is created. For example, if you allow usernames to be case-insensitive and your users sign up using Cognito. You won’t be able to change this later. So if you want to switch to lowercase usernames, you would need to create a new User Pool and transition your existing users to it.

Most third-party providers will have the same basic features as a Cognito User Pool, plus some extras. The user will sign in using OAuth 2, then get a token back. These services also tend to have better user management tools than Cognito. The Cognito dashboard in AWS is very basic and can be hard to use.

Each provider has its list of pros and cons. In general, the drawbacks of using a third-party provider over Cognito are billing and integration with other AWS services.

Most third-party auth providers require you to pay someone besides AWS, so your billing is split to another company. With Cognito, you can tag each User Pool with your environment (development, testing, production, etc.) and group environment resources together on a billing report.